Fine fabric has always dominated the clothing scenario of Bengal. For centuries Bengal has produced fine fabrics that are ideal for hot and humid weather condition. Bengal is known for its hot summer months and mild winter. So it becomes inevitable for the creative weavers of Bengal to produce fabrics that are as thin as air. Bengal is known for its weaving techniques that are centuries old. But even today these ancient looms can produce some of the greatest creations in fabric and especially sarees. Hand woven sarees are quite famous in Bengal and they have earned praises from all over the world.

It is because of the craftsmanship and the fabric that has earned Bengal its praises. Sarees from Bengal are not only exclusive but also exquisite. One of the most adored sarees that actually originated in Bengal and nowadays produced in Dhaka Bangladesh is Jamdani dhakai. Small villages near Dhaka in Bangladesh consist of weavers who still use the age old technique and the bamboo looms to produce these wonderful sarees. It is quite interesting to know that the sarees that are so elegant and speaks of class in its own way are actually woven on a very simple and old loom with intricate weaving techniques done by poor villagers. 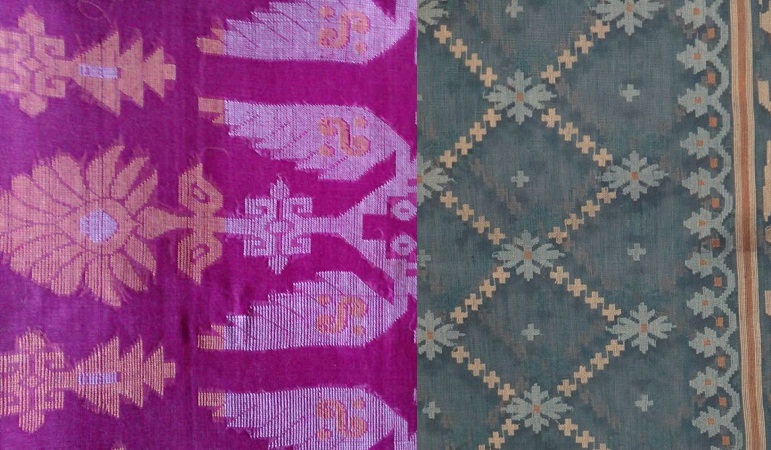 Jamdani dates back to almost 2000 years of Bengal tradition and art of weaving. The rich and glorious history of this weaving and fabric is almost mesmerising. The weaving technique of Jamdani originated in west Bengal.  However, the word jamdani has its origin in Persia in which the word “jam” means flower and “dani” means vase in Persian language.  The name has its relevance because of the floral designs and motifs that are typically used on the jamdani work.  Jamdani uses one of the most ancient methods of weaving on bamboo loom using brocade weaving method. 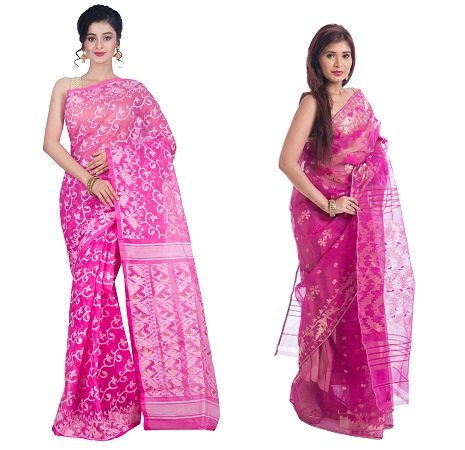 History of Jamdani weaving in Bengal

The history of Jadmani sarees dates back to the ancient times of Mughal Empire. There is some mention of Jamdani in the 3rd century BC writings of Chanakya. In his Arthashastra he has mentioned this word Jamdani. So we can see that since Nanda dynasty Jamdani was in use and even in the 4th to 6th Century AD during the reign of Gupta Empire there is the mention of this craft. Later on during the Mughal rule in 16th Century the weavers of Dhaka (then Bengal) came into limelight who had been weaving this wonder cloth for centuries then. They received royal patronage because of their exclusive workmanship. Under the Mughal rule this work of Jamdani got immense support and attention and it flourished extensively.

One of the most interesting facts about Jamdani is that the finest variety of muslin fabric was manufactured during the Mughal rule. The best of designs, motifs and patterns and the use of gold and silver threads were introduced during this era. Jamdani got the status of royalty and as the Mughal Emperors endorsed this weave, these sarees got an international acclaim too. With the advent of British rule in India the demand for Jamdani work flourished more and more. Jamdani muslins were being exported to UK as well as other parts of Europe in large quantities. But after the 19th century as the British Empire started importing cheap cloths from UK Jamdani suffered heavy losses and this weaving industry almost collapsed.

Nevertheless, soon after the partition of Bengal many jamdani workers shifted their base to present west Bengal and thus how a new dawn of Jamdani weaving started in West Bengal and is now one of the most acclaimed textiles of Bengal. The history of Jamdani weaving is as inspiring as an empirical rule. It had its rise and fall and yet it survived through thick and thin till date.

The technique of weaving that is used is really ancient as we have already seen in the history. Jamdani muslin is woven in a bamboo brocade loom using a supplementary weft technique that actually helps in producing artistic motifs by a non structural weft of weaving technique. Along with this the weaving is also done through the standard weft that basically holds the threads together and forms a pattern for the body. The sheer thin fabric is created by the standard weft while the designs and motifs are created by the non structural weft. So the combination of these two techniques helps in producing some of the exquisite sarees of muslin. 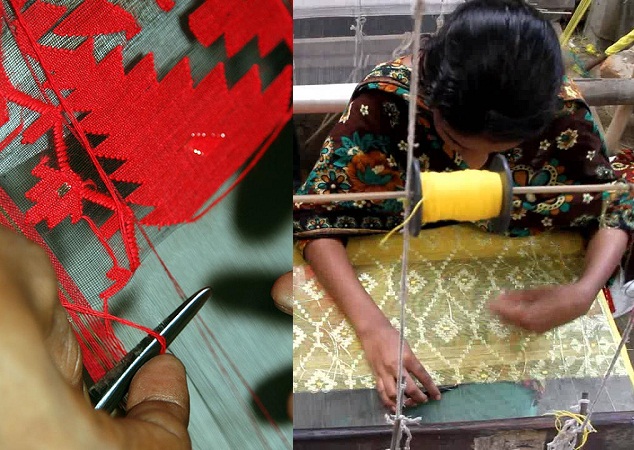 The interlacing of the thick threads with the thin muslin to form exquisite designs on the body requires expertise. The workers in the village go through trainings and years of practices in order to acquire proper expertise. It is a time consuming process to weave one saree and thus it becomes quite expensive. It requires two workers to weave one saree and it can even take a whole year to weave one saree. One of the most interesting things about Jamdani saree is that the designs are not drawn or outlined on the fabric. But it is drawn on a graph and the skilled workers can calculate and weave the pattern onto the saree with their expertise.

While Jamdani is woven typically on muslin threads, but there are other varieties of jamdani work available too. Jamdani work is available on cotton tant (woven) sarees too. Jamdani sarees have evolved in different stages and nowadays jamdani sarees are available in a variety of types according to the craftsmanship of a particular region. Some of these types are:

Jamdani sarees have enthralled women for centuries now. This exquisite saree with its sheer craftsmanship is one of the prides of Bengal. The ancient techniques that are still used meticulously by expert craftsmen of Bengal is something to be admired. Buyers from all over the world come to Bengal to stock up their collection of the best Jamdani sarees for their clients. With a rich tradition and heritage behind her, Bengali culture and artistry has always made her mark in the world. This saree is probably one of the many faces of Bengal that has created phenomenon in the weaver’s world.

Excite Your Ethnic Charm With A Long Sheer Blouse

Look Bold And Beautiful With The Right Halter Neck Blouse

One Side Shoulder Blouse: When Coy Meets Carefree