Be it the Oscars or the Golden Globes, the glamorous presence of the most famous celebrities makes any red carpet event successful. It is not just the presence that makes a red carpet event the center of attraction but the way the celebs present themselves on the red carpet with their extraordinary style statements. It was not before the late 1990s that red carpet fashion began playing an important role in the world of fashion. Earlier the celebrities made their own outfit choices without the intervention of designers and even turned up in casuals. But it was in the late 1990s that red carpet events created standards of their own as far as fashion is concerned. The gorgeous white Valentino dress worn by Halle Berry at the 57th Golden Globe awards is considered the game changer of red carpet fashion. In the various International Film Festivals and the award ceremonies such as the Academy Awards, the beautiful formal outfits were worn by the celebrities become the key attractions which not only make the event all the more glamorous but also play a very important role in the world of style and fashion. 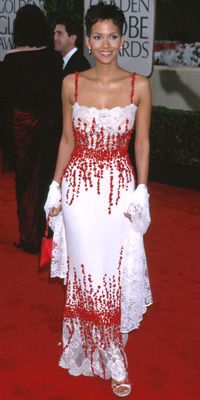 A custom-fitted attire or a couture seems to be one of the most worn and celebrated outfits in the red carpet events. The Elie Saab Couture worn by Elizabeth Banks in the Berlin Film Festival and the Ralph and Russo Couture worn by Fan Bingbing in the Cannes Film Festival top the list of critics’ choice of the year 2015. In the same year, a red Ralph and Russo couture is worn by Erin O’Connor also became the key attraction of the ‘Carol’ Premiere at Cannes Film Festival. The magnificent bow-like feature with a vertical appearance on the left side of the dress enhanced the beauty of the scarlet red couture. It seems that one can easily steal away all the attention of the fans and the media with the elegance of glamorous couture on the red carpet, provided it is designed by a great designer. 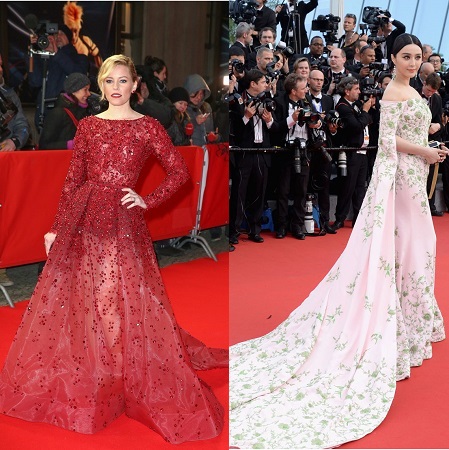 Kate Winslet deviated from the typically sophisticated style she is known for and turned up in custom-made black Ralph Lauren dress. The shiny black texture of the dress was capable of arresting the attention of media and it matched well with the outfit of her old colleague and Oscar winner, Leonardo DiCaprio, who was seen wearing a black tuxedo. The photographs of the Titanic duo occupied the pages of newspapers and magazines covering the 88th Academy Awards. 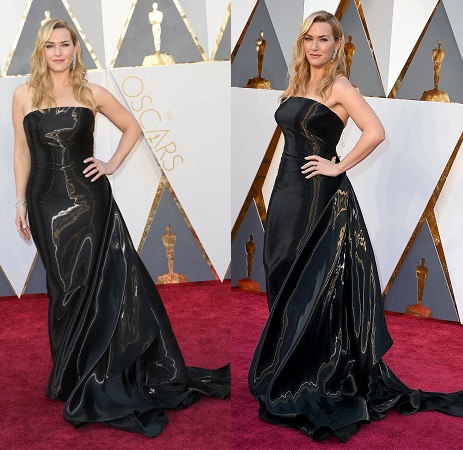 Jennifer Lawrence Among The Best Dressed:

The Oscars 2016 did not fail to bring out the best of its nominees for the glamorous night. Jennifer Lawrence was one of the best dressed celebs on the red carpet this year. She was seen in a sheer lace black Dior gown with a deep neckline. The dress was glamorously decorated with black feathers which made it all the more attractive. 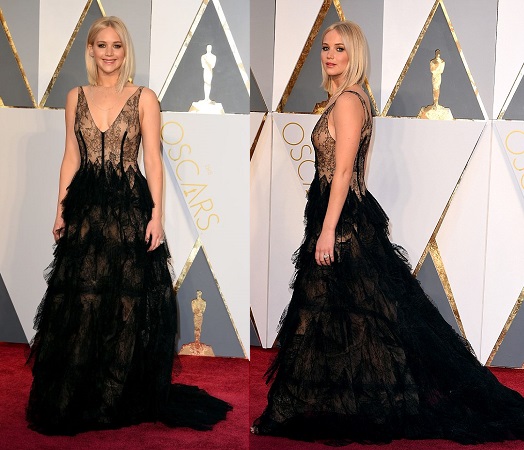 Charlize Theron In The Crimson Gown:

Another custom-made dress by Dior Haute Couture stole away the attention of the media when Charlize Theron was spotted on the red carpet in the 2016 Oscars wearing it. The crimson gown with a plunging neckline gave her a sensuous and elegant look at the same time. The silver pendant on the neck running parallel to the neckline enhanced the beauty of the outfit. 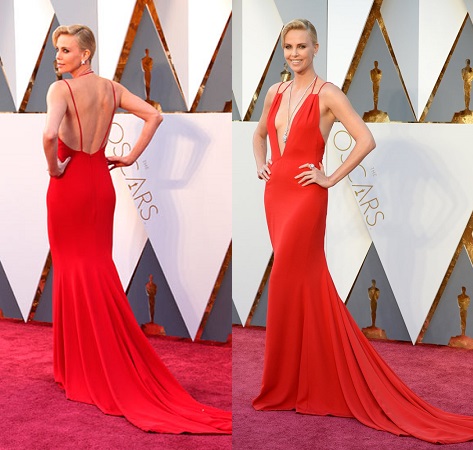 Red carpet fashion is not only gorgeous and attractive but also several based on the various style statements of different actors. When on one hand Lady Gaga strikes a difference in an off-shoulder white jumpsuit, on the other hand Swedish actress and the winner of Best Supporting Role in ‘Danish Girl’ occupied the headlines with the Disney look wearing the yellow Louis Vuitton dress. She not only arrested everybody’s attention with this unique choice of attire but also drew comparisons with Disney princess Belle. Cate Blanchett was also found in a fairy-tale look with the light blue flowery Armani gown with a plunging neckline. This unique blend gave her a sweet and bold look at the same time in the Oscar ceremony 2016. No wonder, this very actress was seen in a soft pink embroidered dress of the most gorgeous look in the Golden Globes in the same year. 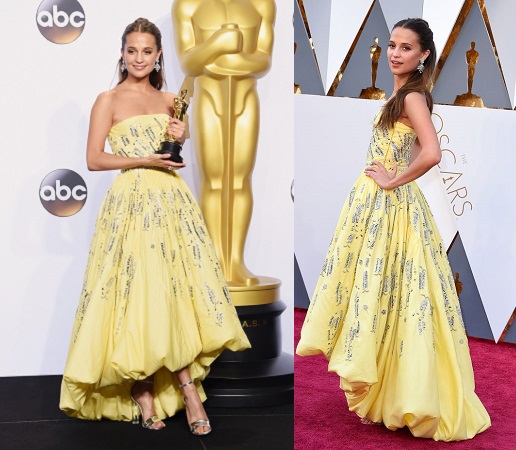 Jennifer Lopez In The 42nd Grammy:

One of the most talked-about red carpet outfits is the sheer green Versace gown which gave Jennifer Lopez a stunning and sensuous look. The tropical leafy patterns printed on the green sheet material gave it an exotic appearance which made its way to the headlines. This ready-to-wear dress worn by Jennifer at the 42nd Grammy Awards was publicized widely and it earned the comments of fashion critics worldwide. This is indeed one of the most famous, memorable and exotic of the red carpet fashions that can be recalled. 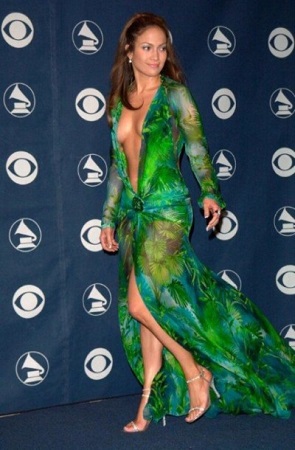 The Role Of Designers:

Since the late 1990s the role of the fashion stylists has increased in Red carpet fashion. Be it the Golden Globe, the Academy Awards or the International Film Festivals, the celebs are becoming increasingly dependent on the designers who can provide them with the best custom-made outfits to suit their look. Thus, the red carpet events have become important forums for the stylists to design the most gorgeous and elegant outfits. It has become the concern of the stylists to come up with the most innovative and glamorous attires which can feature their clients as the best dressed in a particular red carpet event. So, each stylist always tries to ensure that his/her clients step out of the car on the red carpet wearing the best outfits. This growing competition among the fashion stylists to showcase their best designs in the award ceremonies and the likes, explains the ever evolving fashion on the red carpet.

Red carpet fashion plays a prominent role in the world of fashion. It not only provides a forum for the stylists to come up with elegant and glamorous designs but also inspires the style freaks and the fans of the red carpet celebs to follow this forum and upgrade their personal style statements.

Look At Your Best Wearing The Exclusive Lehenga On Your Wedding

What type of Indian ethnic wear and jewelry is famous and...

The latest cigarette pant suits to try in 2016